The weekend! I heard the weather forecast and wondered whether we could do without it. Does it even matter now?

A walk (yep the weather matters!) – got the sweats up today –  chats to family and friends, although not face-to-face. The roads were quiet, but not completely clear, although I got this shot of one of the busiest roads in New Zealand on my walk. The prison in the background. Every hardship in perspective. 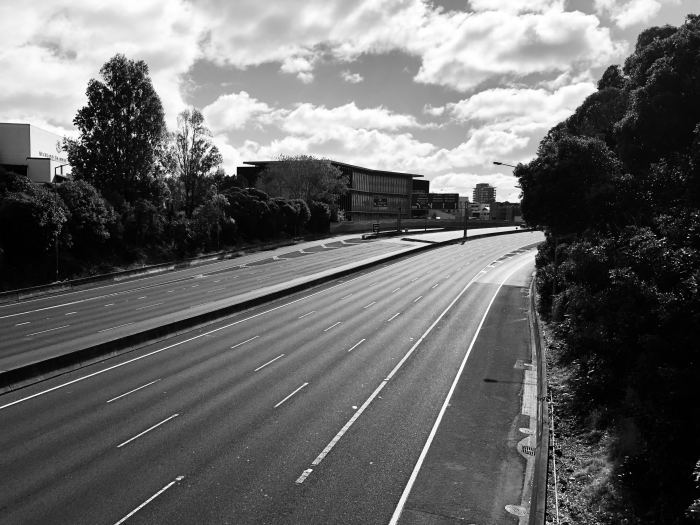 I started a new audiobook – Getting Things Done – by David Allen on my son Thomas‘ recommendation. As the world changes we all need to find new ways of working and finding fulfilment.

I broke my Facebook Amnesty – a tool from my last book – Deep Work by Cal Newport which has unexpectedly prepared me for my Home-D. Unsurprisingly, Facebook hasn’t changed, but the mood seemed to be of compliance with the new emergency lockdown and almost unfettered power to the police. Questions about approach appeared to burst bubbles (not the home bubble I hope!) of reverence to those in power. It worries me that there is so little critical thinking on where we’re going. I’m not saying we’re not doing the right thing, but in Leadership, embracing all alternative viewpoints provides a richness in decision making. Think Appreciative Inquiry, Strategic Thinking, Ladder of Inference and BXT. When we embrace views contrary to ours we do our best.

I obsessed slightly about the rates of COVID-19 infection and impacts. Cases went up in New Zealand as expected, by about the same as the day before, although the numbers in ICU doubled – from 1 to 2. Global cases passed 600,000 with deaths at 27,500 and those in serious or critical condition at 23,500. Ninety-five percent of cases still active are in mild condition.  Italy and Spain have extraordinary large numbers of deaths per million of population (151 and 110), then there’s a group in the 20s and 30s (France, Iran, Netherlands, Belgium, and Switzerland), a few countries with rates of 5 – 10 per million and the bulk well below.

Practiced some Windfulness today on my walk – focussing on the surroundings and stillness, although there were plenty of people out exercising. I used the time to bring my thoughts in closer, to focus on what I can control and lead. It helped.

Anxietyometer: Started higher today, but down after the walk and focussed mindfulness.

Season 3 of Ozark is out!

Stephen Drain Hi everyone, I am a Partner in PwC in Auckland New Zealand. I lead PwC Forensics Services and PwC Leadership Development Services. I am the People & Culture Partner for PwC Consulting in NZ. My particular area of focus in leadership is Authenticity.
Published March 29, 2020March 29, 2020