As an experiment I cancelled my permanent carpark before Christmas 2014 and put a piece of card on my garage wall to record my daily commute in 2015 with three options: Scooter, Bike or Car. I also kept a running tally of carpark costs.

My commuting bike is an e-bike – which means it’s electric assist. I can go along about 10-15 km/h quicker for the same effort than a standard bike will do. Speed is an advantage and it’s excellent in the wind and on hills. In theory you can ride it without pedaling but it doesn’t go that quickly on anything other than the flat, and in any event not for long. Another advantage for me is that I can commute in business attire and although I’m warm (and wide awake!) when I arrive at work, there’s no need for a shower.

My scooter was a 50cc moped at the beginning of the year. I found the Scooter more challenging than the bike. I found car drivers treated the scooter as simply another motor vehicle, with unrealistic expectations of acceleration and speed. On the bike, my experience has been most motorists are considerate and respectful of the cycle’s limitations and your vulnerability. Of course there are exceptions and I could write a blog or three about that!.

I recently upgraded the scooter to a much more powerful machine requiring a motorcycle licence, and now my Driver Licence is clearly marked “Learner”.

During the year the daily rate for parking went up from $13 to $17 so that had an impact on the days I took the car. Other factors included a rule that if it was raining I wouldn’t start the journey by cycle – that rule went by the wayside once I got some excellent rainproof gear from Europe – and I wouldn’t take the scooter if it was going to rain.  With the new scooter I don’t worry about the rain at all. 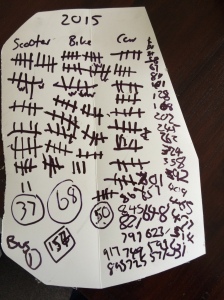 Ignoring the statistics, my recollection of the year was that the preferred form of travelling by far was the e-bike, especially with the Grafton Gully cycleway opening and more recently, Te Ara I Whiti, the Nelson Street cycleway with the striking “blood of the Totara” coloured surface. I frequently used the bike to go to clients, to personal appointments, and to do errands after work. It has a range of about 40 km on one charge, and I ran out of power once I think, quite close to home.

When I got my new scooter the e-bike took a back seat. Maybe it’s the newness, but it was first choice for the weeks before Christmas after I got it. Like the e-bike, I can use the bus lanes, generally get to the front of the traffic queue if required, and parking is free, right next to the office.

I used the car when I had to take someone somewhere, needed to go somewhere where the bike couldn’t easily go, such as over the Shore, or on occasion when I was very tired.

Not counted in the stats is the use of the car or a taxi to the airport when travelling – which accounts for many of the missing days in my tally. The other missing days are leave and public holidays.

Overall, two wheels combined beat the car 2:1. I spent $917 on parking which was less than half the amount I would have paid for the permanent carpark. And there were other costs – charging the e-bike costs about 1.2 cents a time – yes you read that right!, and having a second vehicle costs a vehicle licence and insurance.

Reflecting on all of this, twice in the last week I’ve taken my road bike up the northwestern cycle lane next to the motorway. A great cycling route. As anyone that goes out that way will know it’s about 15km of motorway reconstruction. Some of it looks so wide it must be 10 or 12 lanes all up, which I imagine will include bus lanes. The signs promise “More lanes by 2017”.

Roading infrastructure is important and we’ve been behind in New Zealand for a long time. But there will be a limit – roads that were relatively recently expanded become jammed up and there’s little doubt that New Zealand cities are moving to more public and self transport options as priorities ie non-car!  The experience in other countries which I have seen first hand convinces me it’s the right move for a much more liveable city.

Even if you don’t consider cycling for any altruistic reason, I’m pretty confident that cycling once or twice a week will have most people smiling at the enjoyment and health of it as a commuting option.

Two things make the cycle the number one choice for me: the movement – I’ll call it that rather than exercise – the e-bike is not what I’d call a workout,  that’s what my road bike is for – and the alertness required (which also applies to the scooter). I arrive at work much more energised and connected. And with all the other friendly commuters to chat to at the lights there’s a real sense of community.

Now a final note on safety.  Mum would feel much better if I kept to the car – she’s said so. Don’t charge out up Great South Road, or Dominion Road on the first strike out. Take it easy with some trial runs on a Sunday morning and let the confidence build up. Get lights, a high-vis vest, a mirror for commuting, a horn,and assume that no-one sees you. Mum will worry less then!

One thought on “A year on two wheels”