My 19 year old son Thomas invited me to a concert yesterday.  Knowing his tastes in music I purchased earplugs, and off we headed.  Are you sure you’re okay with coming along he asked?  Sure man, I like music!  After a bite to eat we headed off to The Transmission Room.  The band was called Lightening Rod Bolt, 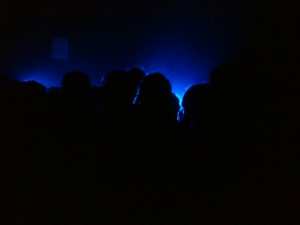 apparently from New York – it goes without saying I had never seen them previously.

Checking in at the door I was asked “Father and Son?” and on confirmation “hey what a cool Dad!”  Of course (sorry I had to say this – when you’re closer to 50 than 40 you hang on to everything you can).

Not since Mr JJ McAullife told me off in Form 2 Latin have I heard such noise!  I thought my jeans were vibrating, then I realised they were actually being forced to one side by the wind from the speakers.  The band played at floor level so unless you were right up close you couldn’t seem them.  The first “row” of spectators immediately started shaking wildly which I quickly realised was dancing, followed by the second and third rows and which point Thomas excused himself to join in.  I felt slightly anxious that the shaking thing might envelop me but was reassured when I looked at the people around me to see that they were probably Jesus’ disciples (or at least they had the same hair styles).

What did I notice and why am I writing this up?  What really struck me was the respect that everyone had for each other.  Going crazy in the moshpit they moved and jostled as one and no-one appeared to get pushed or hurt.  You wouldn’t know it if you landed there without some context, but this long-haired, black T-shirt crowd could teach many of us respect for each other in a tight situation.  Thomas tells me there were only two in the band – though I didn’t see them.  It was fun and the crowd (and one Dad!) were pretty cool.

One thought on “What a blast!”