If you work in a large organisation as I do you might experience from time to time, this thing, sometimes referred to as bureaucracy. I quite like the word bureau, sounds like a solid agency, slightly upmarket who know what they do. Add a misspelt crazy on the end of it and you have a range of behaviours and stories that can form the basis of leadership stories for workshops from here to infinity!

We all get consumed in our own little worlds from time to time, especially when the pressure comes on from the crazy bureau.

I’ve been doing quite a bit of motorway driving lately (aka freeway – see I’m not consumed only in my little world!) and noticed lots of drivers who, especially during mid to late morning when you can briefly drive at the speed limit, enter the motorway and as quickly as they can, but driving quite slowly, more over to the ‘fast’ lane, and stubbornly proceed without any regard to others. What can you do? Flash the lights? Tailgate? Pass on the inside? Breath out and relax? Yes, all of those things. But I’ve started the great role modelling experiment: When I can, no matter whether there’s anyone behind me or not, I move over. 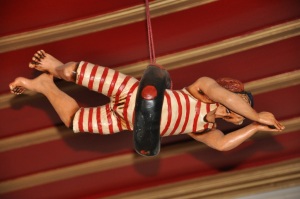 That probably sounds obvious if you’re in  Australia or US reading this, but it’s not here in NZ. And I’ve monitored the behaviour of other vehicles, compared to the other techniques. I reckon one in three react to the traditional methods. Two out of three mimic my driving, if I deliberately pull over when I don’t need to.

It’s very easy in the crazy bureau to be consumed by your role and you’ll see it in the language:  “We need to know this for our records” or “You’ll have to fill in this form – we can’t process the claim without that particular form filled in”. I don’t mind admitting I don’t react well to such nonsense. Maybe I’m not suited to the crazy bureau.

But I do know that if we all role model the behaviours we expect of others, it might not always work or have immediate effect, but like the motorway, it’s a start.

Consumed by your role, or a role model?