Visiting Grandma (and Grandad till he died in 1967) in Auckland in the 1960s and 70s were great times.  The memories are not complete without reference to the sound of the mantle piece clock sounding every 15 minutes.

After Grandma died in 1990 I took over the clock which after 50 odd years of service had stopped functioning. It wasn’t until this century that I had it restored to it’s former glory though somehow I don’t have the same ability to sleep through the chimes every 15 minutes that Grandma seemed to, so I don’t wind up the chimes or on-the-hour bells.

It’s incredible how the sound of the clock can bring back so many memories, both in time and space and when the dear old clock stopped working a few weeks ago it was off to the Polish watchmaker in Queen Street who restored it originally for me.  Grandma was a no nonsense person who said what she thought when she thought it and didn’t go for ceremony or emotion. Watching the celebrated New Zealand pianist Michael Houston in full flight on the TV once she remarked: “Why doesn’t he keep his head still – he’s only hitting the keys, all that moving around is quite unnecessary!”

The message from the watchmaker was one Grandma would have appreciated. Listen to it here: Watchmaker message. Priceless. Just what you’d expect. It’s a full service required – $400 – but that’s a small price to pay for keeping all those memories alive.

We should look forward and live in the present. But we are made up from the past too. 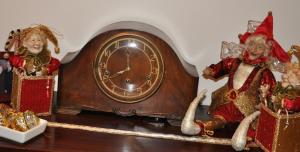 2 thoughts on “Grandma’s Clock Part One”